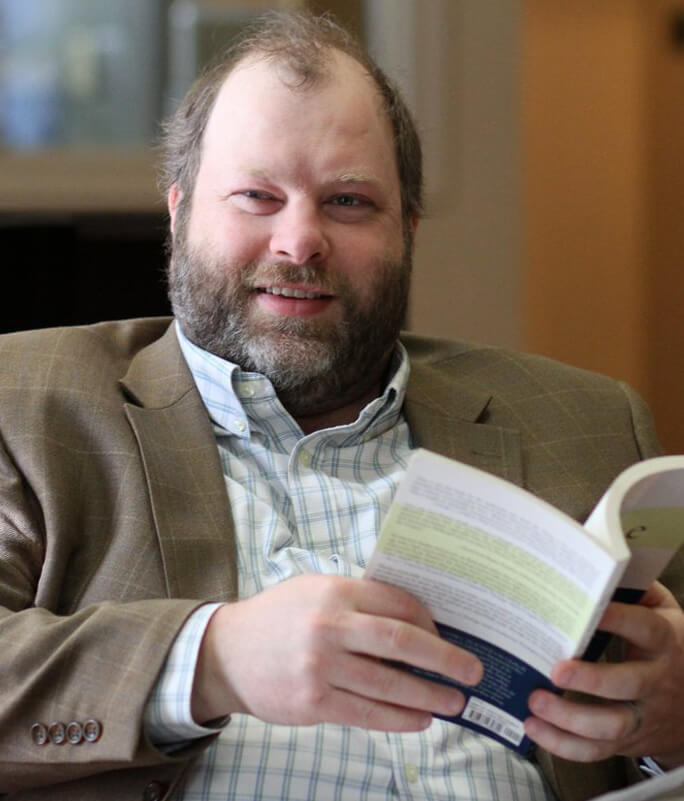 The Rev. Dr. Derek R. Nelson is the Stephen S. Bowen Professor of the Liberal Arts and professor of religion at Wabash College. He teaches courses in both of those fields, as well as religion and culture (such as literature and film), social ethics and whatever else students are interested in studying with him. In recent semesters independent studies with students have included “Faith, Food, and Sustainability Ethics,” “Christianity and Natural Science,” and “The Christology of Karl Barth,” and he regularly teaches a course on Christianity in Ancient Rome, which includes an immersion trip to Rome. Over the last four years, nine students have interned with Nelson in the religion department, and he invites more in the future.

Nelson is the author or editor of ten books, including The Oxford Research Encyclopedia of Martin Luther. This multi-volume work is the state of the field resource, and comprises cooperation from 122 scholars across the world. His intellectual biography of Martin Luther, co-written with his deceased mentor Timothy F. Lull, is Resilient Reformer: The Life and Thought of Martin Luther. He has written about 50 articles, essays in books and reviews. He served on the task force that produced a social statement for the Evangelical Lutheran Church in America (in which he is an ordained pastor) called The Church and Criminal Justice: Hearing the Cries.

An avid traveler, Nelson has led groups of students and clergy to Italy, Germany, Mexico, and South Africa, among other international destinations. His study-abroad experience in Karlstad, Sweden was so formative that he has become a strong advocate for students to gain cross-cultural experience. Nelson also directs the Wabash Pastoral Leadership Program, which serves an ecumenical group of Indiana pastors who are developing as civic leaders. This is funded by the Lilly Endowment and hosted by Wabash College. Attentive to his surroundings, he lives in the Sugar Creek watershed, agricultural zone 5b for plant hardiness and sunlight, and the Indiana-Kentucky synod of the Evangelical Lutheran Church in America. He brews beer and makes furniture. He loves to play golf and catch fish.

Nelson was raised on a beef cattle farm in Vasa, Minnesota. He lives in the woods near Crawfordsville and is married to the Rev. Kelly Nelson. They are the proud parents of toddler Madeleine.

The Rev. Dr. Nelson will speak about the Holy Spirit and the stuff of life during the Braaten-Benne Lectures in Theology.